Phoebus Phantom Mentalist Competed in Rumble in the Roads

On Saturday, November 5, 2016, the Phoebus Robotics Team, the Phantom Mentalists, who have been partnered with Community Knights since the introduction of the GIFT program, competed at the 3rd annual Rumble in the Roads robotics tournament at Menchvhille High School.  Over the past year, the Phantom 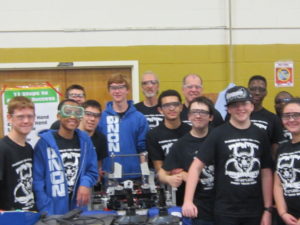 Mentalists have earned numerous awards and have achieved their greatest success to date.  Last year, the team reached the semi-finals in the district championships and barely lost to the overall champion.  The Phantom Mentalists also had the highest overall scores in the district, and won awards for Excellence in Engineering as well as Most Outstanding Industrial Design. Team Mentors Tom Dunn and Kevin Bond attribute a great deal of the team’s recent success to the Community Knights GIFT Program.

Recently, Phoebus lost funding from their primary sponsor.   That funding helped provide money for tournament fees, parts and supplies, building equipment, and travel expenses.  In total, a Robotics season requires roughly $25,000 to cover these expenses.  Robotics teams throughout the country depend on local businesses and technology companies to provide sponsorships for these programs to ensure that students have adequate resources to com
plete these collaborate, STEM-based projects.  Without sponsorships, teams cannot exist.

Community Knights have helped buffer these costs, providing the Phantom Mentalists with the funds needed to not only compete, but excel.  The most recent grant awards even allowed the team to purchase a 3-D Printer, which will utilize both carbon and nylon elements to build parts strong enough to withstand the wear and tear that robots have to withstand through testing and competitions.  They were also able to purchase a new CNC Mill.

The new technology allows these hardworking and technologically savvy students, each of whom works over 200 hours per year for the team, the opportunity to work more efficiently.  They are also able to make a stronger robot with a better suspension and shock absorption systems.  Likewise, they believe they now have the resources to make “more creative solutions to the robot games” which allow for “unique results and more awards.”

The Phoebus Phantom Mentalists feature Phoebus’ top two senior class students and a multitude of incredibly technologically gifted and intelligent students who are putting the money awarded from Community Knights to use not only build sophisticated technology now, but to build a brighter future for themselves as well!